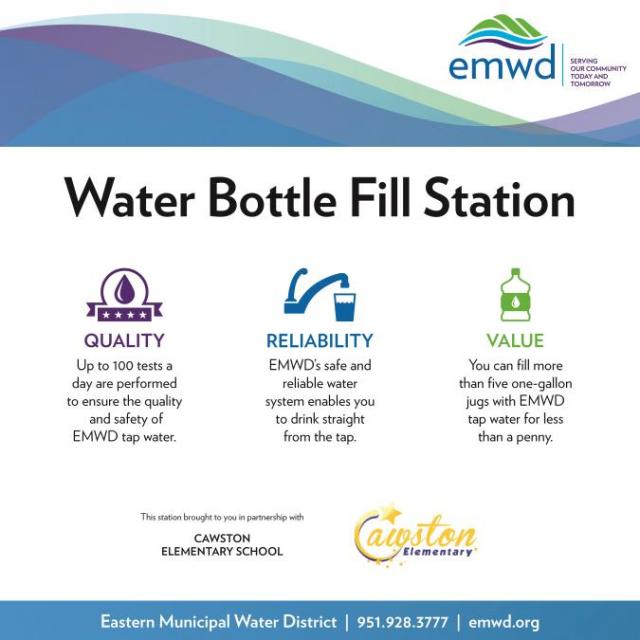 Hemet Unified School District and Menifee Union School District in late December finished installation of the fill stations at their final schools to which EMWD provides water service. Both districts also have schools that are outside of EMWD’s service area.

Hemet now has 10 schools with the wall-mounted fill stations and Menifee has nine.

“We are incredibly proud of our partnerships with local schools,” EMWD President David Slawson said. “Our hope is that every school within our service area has a water bottle fill station available to their students and staff.

“These fill stations have not only been incredibly popular, but allow students to see the benefits that tap water provides while also promoting healthy lifestyles.”

The water bottle fill stations are similar to drinking fountains but include an overhead filling system to easily fill reusable water bottles. EMWD actively promotes the use of refillable bottles as part of its commitment to conveying both the value of tap water and environmental stewardship.

Each fill station has a display screen that tracks the number of plastic bottles that have been avoided by using the fill station. This results in less plastic in the land fill.

Schools in the Temecula Valley, San Jacinto, Moreno Valley, Val Verde, Romoland and Nuview Union school districts and Mt. San Jacinto College and Moreno Valley College have also participated in the program. A total of 41 schools throughout EMWD’s service area have water bottle fill stations, with more anticipated to be installed in 2018.