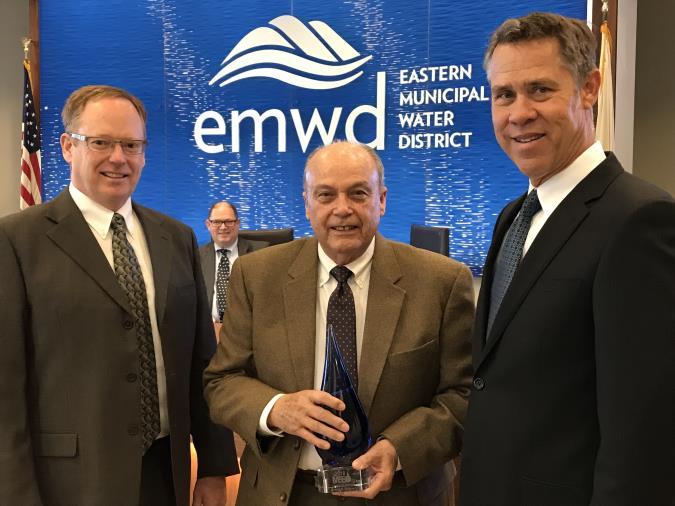 Sullivan has been a longtime advocate for EMWD’s desalination program, which helps meet approximately five percent of EMWD’s water supply portfolio each year. EMWD is in the design stages of a third desalination facility that will further increase capacity.
The Perris, Menifee, Lakeview and Nuevo areas have a groundwater basin that has high salt content and is therefore unusable. In 2002, EMWD launched its desalination program to make use of the water supply and to protect adjacent basins from salt intrusion.

Over nearly two decades, the program has expanded to include the two desalination facilities, 14 wells and additional pipelines to produce clean drinking water. The salt is then exported through a regional brine line managed by the Santa Ana Watershed Project Authority, of which Sullivan is a Board Member.

The United States Army Corps of Engineers recently completed two new groundwater desalination wells and a third is under construction for EMWD. The wells – funded in large part by an Environmental Infrastructure appropriation through the Water Resources Development Act – will be granted to EMWD.

In addition, Sullivan has been a long time advocate for research and development to advance innovative salt management technologies in partnership with the U.S. Bureau of Reclamation.

“I would first like to express my appreciation to the Salinity Coalition for this honor,” Sullivan said. “Groundwater desalination has become an important piece of the water supply in EMWD’s service area, and my colleagues on the Board and our staff have innovated to expand that program to meet the needs of our customers.”

Eastern Municipal Water District (EMWD) is the water, wastewater service and recycled water provider to approximately 804,000 people living and working within a 555-square mile service area in western Riverside County. It is California’s sixth-largest retail water agency and its mission is “To deliver value to our customers and the communities we serve by providing safe, reliable, economical and environmentally sustainable water, wastewater and recycled water services.” More information can be found at emwd.org.