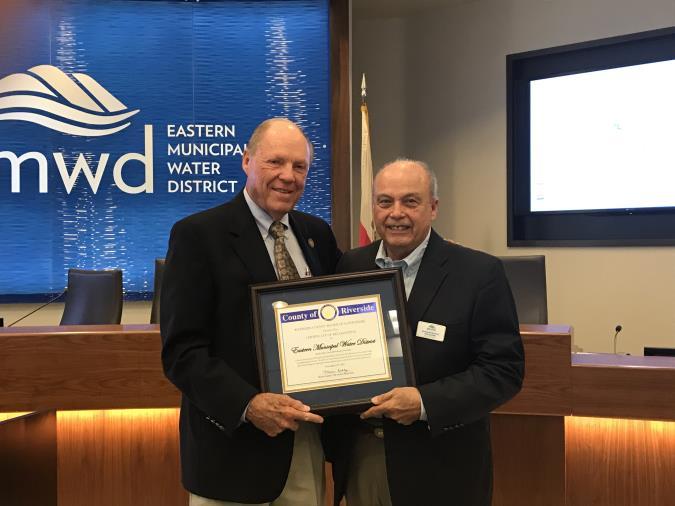 EMWD and other organizations have worked for nearly three decades to advance the grant-funded project to provide a sewer system to the Quail Valley community. The first phase will provide sewer service to 150 homes and 66 vacant lots on the southern end of the community. Future phases will be dependent on additional grant funding opportunities.

“This is a milestone achievement for the Quail Valley community,” said EMWD Vice President Ron Sullivan, who represents the area. “EMWD and many others have worked for more than a generation to present our case, emphasizing the need for a sewer system and to secure funding from state agencies for the project to move forward without placing the burden on ratepayers in the community.”

Earlier this year, EMWD finalized an agreement with the State Water Resources Control Board (State Board), which is providing $8 million toward the cost of the project. The Santa Ana Watershed Project Authority previously provided $1.93 million in grant funding, and the Santa Ana Regional Water Quality Control Board provided $455,814 in Supplemental Environmental Protection funds.

The region is currently served by septic systems – many of which are failing and resulting in raw sewage discharging into local ground and surface waters. The Santa Ana Regional Water Quality Control Board in 2006 imposed a septic systems moratorium in the area and the County of Riverside imposed a prohibition on new septic tank installations.

Once a rural enclave with properties that often served as vacation homes, the septic systems in the Quail Valley community were not constructed with everyday use in mind. As the area grew and homes became occupied year round, the septic systems were unable to keep up with increased usage, and began to fail.

Now considered an economically disadvantaged area, EMWD has for many years coordinated with several community groups, including the Quail Valley Environmental Coalition, to work on behalf of residents to secure grant funding from the state. The median household income in the Quail Valley community ultimately became a primary factor in EMWD obtaining grant funding.

The construction of the sewer system will include a mainline system in the public right of way and lateral connections to 150 existing homes and 66 undeveloped parcels. Contractors will abandon the existing septic systems and connect the laterals to the properties on the developed parcels. The new sewer system will connect via gravity flow to a regional lift station that is being constructed by EMWD and funded in-part by the developers of the Audie Murphy Ranch development in Menifee, who will utilize the lift station.

“This project will enable the Quail Valley community to take a significant step toward its future,” Sullivan said. “Because of the failing septic systems, the region has sustained environmental damage and has been unable to accommodate any future new growth. This sewer system will serve as the answer to both of those issues that have hamstrung the community for far too long.”