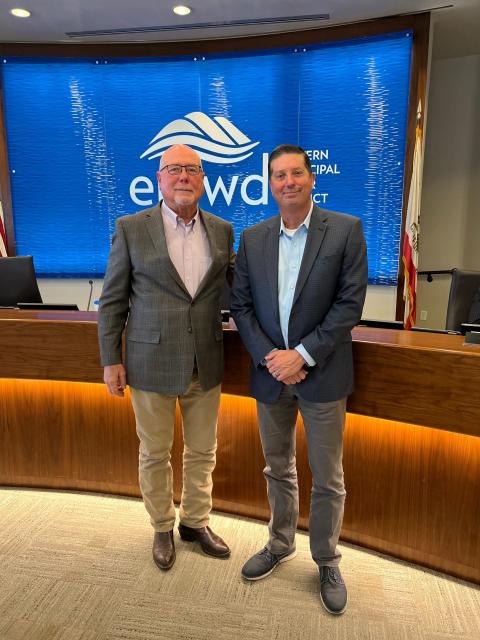 Perris, CA (December 21, 2022) — Eastern Municipal Water District (EMWD) Board Vice President Randy Record, who is widely considered one of the leading water policy makers in California, announced today that he would be stepping down from his position as EMWD’s representative on The Metropolitan Water District of Southern California (MWD) Board of Directors.

The move is effective December 31, 2022. Record will remain on EMWD’s Board of Directors.

On behalf of EMWD, Record served on MWD’s Board of Directors since 2003. His father, Clayton Record, was also a Director for MWD and EMWD.

Record is also a former Chairman of the MWD Board where he stewarded the country’s largest water agency during California’s previous drought. Under his leadership, MWD invested over a half billion dollars in the removal of nonfunctional turf. He served as MWD Chair from 2014-18.

During his tenure on MWD’s Board, Record was a leading voice in bringing together water users from urban and agricultural backgrounds to find common solutions to California’s water challenges. His focus was on building coalitions and advancing long-term solutions such as the California Water Fix and the Regional Recycled Water program.

“After nearly two decades on the Board at MWD, I feel that now is the right time to step aside,” Record said. “I am incredibly proud of the accomplishments we have made during my time on the MWD Board that have paved the way for a more sustainable water future for all Californians.

“I have asked EMWD to appoint a new delegate so that I may focus on my other passions, including my own farm and my broader pursuit of regenerative agriculture.”

Jeff Armstrong, who represents the Menifee and Perris areas on EMWD’s Board of Directors, was chosen as EMWD’s new delegate to the MWD Board of Directors, effective January 1, 2023. Armstrong has more than three decades of experience in the water industry and is the former General Manager of Rancho California Water District in Temecula.

Record is a San Jacinto native and has been an active in the agricultural industry for decades. He owns a family vineyard in Paso Robles, Calif.

Record said that he plans to devote more time to his family and his passion of sustainable agriculture, including partnerships with California State University, Chico.

“On behalf of not just our Board of Directors, but the entire water industry, we would like to thank Randy Record for his time on the MWD Board,” EMWD Board President Phil Paule said. “Randy is a pilar in our industry and has brought together water users from across the state in ways that few others could. MWD is better for the leadership and vision that he has brought to their Board, and EMWD is appreciative of his presence at MWD for the past 20 years.”

Eastern Municipal Water District is the water, wastewater service and recycled water provider to nearly one million people living and working within a 558-square mile service area in western Riverside County. It is California’s sixth-largest retail water agency, and its mission is “To deliver value to our diverse customers and the communities we serve by providing safe, reliable, economical and environmentally sustainable water, wastewater and recycled water services.” More information can be found at www.emwd.org.