Randy A. Record EMWD Board Director, Division 3 and The Metropolitan Water District of Southern California Board Member 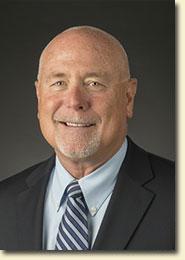 Record has been active in the farming community for more than four decades and currently owns and operates a wine grape vineyard in the Central Coast with his wife and two daughters. He also is a board member of the Bank of Hemet.

A past president of the Association of California Water Agencies (ACWA), Record was elected to EMWD’s board of directors in January 2001 and has served two terms as EMWD’s board president. Record was appointed to the Metropolitan Water District of Southern California (MWD) board of directors in January of 2003 and served as Chairman from 2014 to 2018. He is also founding chair of the Riverside County Water Task Force.

Record is past co-Chair of the Southern California Leadership Council, as well as a member of the San Luis Obispo County Farm Bureau and the Monday Morning Group of Western Riverside County. He is also a member and past president of the Hemet/San Jacinto Action Group.

He and his wife, Anne, a retired San Jacinto school teacher, have two daughters, one granddaughter and three grandsons.