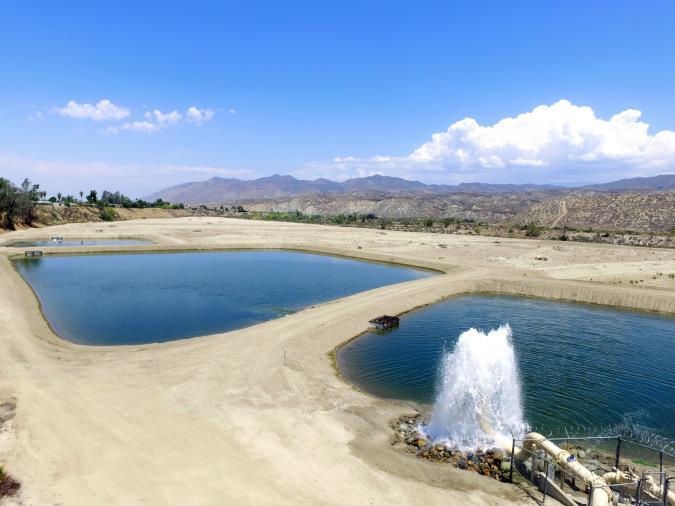 Perris, CA (January 31, 2017)—In an effort to counter the effects of a years-long drought and ensure the region is well-prepared for future drought cycles, water agencies throughout the San Jacinto Valley are aggressively working to recharge water into the San Jacinto Groundwater Basin.

In 2016, the four agencies that provide service in the San Jacinto Valley – Eastern Municipal Water District, Lake Hemet Municipal Water District, and the cities of Hemet and San Jacinto – collectively put more than 12,000 acre-feet of surface water into the local groundwater basin. One acre-foot equals about 326,000 gallons, or enough water to cover one acre of land, about the size of a football field, one foot deep and is enough to supply the average household needs for two families for a year.

That water will eventually be extracted through wells operated by the respective agencies and the Soboba Band of Luiseño Indians and used for drinking water purposes.

Following the easing of statewide drought conditions in the spring of 2016, Eastern Municipal Water District began putting water purchased from The Metropolitan Water District of Southern California (MWD) into settling ponds in the San Jacinto Riverbed as part of its Integrated Recharge and Recovery Program (IRRP). Intentional recharge is the process of supplementing groundwater supplies by allowing water to percolate into the groundwater aquifer. This supports the four agencies’ Groundwater Management Plan and results in additional groundwater supplies that can be used for potable purposes.

Through the end of the 2016 calendar year, 12,656 acre-feet (4.1 billion gallons) of water imported from the Sacramento-San Joaquin Delta through the State Water Project system was recharged into the local groundwater basin, including 9,142 acre-feet at the IRRP ponds, and 3,514 acre-feet at the Grant Avenue Ponds.

EMWD was also able to divert an additional 515 acre-feet of stormwater naturally flowing through the San Jacinto River into EMWD’s Grant Avenue Ponds.

Since the start of 2017, a total of 1,107 acre-feet of water has been imported and 642 acre-feet of stormwater – more than 20 million gallons per day — has been captured, for a total of 1,749 acre-feet, for the purpose of groundwater recharge in the area.

“By being aggressive in how much water we recharge, our agencies are ensuring that our region is well-prepared for future drought cycles, whenever they may occur,” EMWD President David Slawson said. “It is our responsibility to act decisively and manage our supplies and appropriately plan for the future. By optimizing water capture during wet years, we are able to ensure reliability for our customers and businesses during droughts similar to the one we have recently experienced.”

The four water providers in the San Jacinto Valley are responsible for recharging an annual average of 7,500 acre feet of imported untreated water per year under the terms of a federal judgment related to water rights for the Soboba Band of Luiseño Indians. EMWD owns and operates the facilities to deliver water to percolation ponds. Each agency has a certain volume of water that it must purchase from MWD each year as part of those recharge efforts.

California’s extended drought resulted in MWD suspending water available for recharge from July 2013 until May 2016. With increased deliveries from the State Water Project last year, MWD was able to ensure delivery of additional imported surface water supplies and efforts were quickly resumed locally to increase the amount of water stored within the groundwater basin.

The agencies have adopted a goal of recharging more than 23,000 acre-feet of water in 2017. If those figures are met, the agencies would be ahead of their average annual recharge rate and be credited with having put surplus water into the groundwater basin.

“Through these efforts, we are able to ensure the long-term sustainability of our local water supplies,” Lake Hemet President Frank Gorman said. “Our agencies have and will continue to work together to ensure that our region is well-prepared for future water supply challenges. These recharge efforts are an example of the importance of agencies working together for the benefit of all residents.”