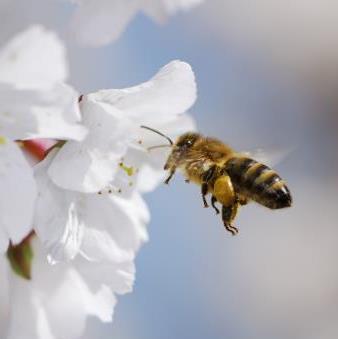 EMWD – Riverside County’s largest water agency – has adopted and implemented a new policy that is protecting nature’s pollinators while ensuring safety within our communities through the protection and relocation of live bees that are found at EMWD facilities or within customers’ water meter boxes.

As the weather heats up in the spring and summer, bees begin coming out of hibernation and become more active. This includes making new hives, which can host thousands of bees.

By safely removing and relocating bees whenever possible, EMWD is being an environmentally responsible partner by protecting the honeybee population, which has been steadily declining worldwide. June 19-25 is National Pollinator Week, which is designed to raise awareness of the declining pollinator population.

In 2016, seven species of bees were added to the Endangered Species List by the United States Fish and Wildlife Service – the first time bees had been placed on the list. A 2016 survey by the United States Department of Agriculture’s Agricultural Research Service and the Natural Agriculture Statistics Service of more than 23,000 beekeeping operations showed that the number of hives diminished by 8 percent in 2015.

“The decline of bees is a serious problem and has a direct correlation on our environment and local agriculture,” EMWD President David Slawson said. “EMWD wants to ensure it is doing its part in protecting the bees by safely relocating them while also helping to protect the safety of our communities.”

Bees are responsible for the pollination of about $15 billion worth of crops each year in the United States, including about 130 fruits and vegetables. A healthy bee population ensures more abundant crops and many high-value crops rely on commercial beekeeping operations.

Should an active hive be discovered on EMWD property or in a water meter box, a vendor is contacted and typically responds within 24 hours.

The bees are vacuumed into a secure storage area and the honeycomb removed and safely transported. Should the bees be found in a water meter box, steps are taken to prevent future swarms from returning to the same location, including spray painting or replacing the bottom of the meter box lid to mask the scent of the bees. More than 80 percent of the bees will be safely transported off-site and used for beekeeping purposes.

Since September, 2016, when EMWD contracted with a live bee removal service vendor, bees have been safely relocated from EMWD facilities and meter boxes 62 times. The bees are used for educational purposes and sold for pollinating crops. EMWD responded to 210 bee removal requests since 2014.

Should a customer discover a bee hive in their water meter box or at an EMWD facility, they are encouraged to avoid the swarm and contact EMWD’s 24-hour Integrated Operations Center at 951-928-3777, ext. 6266.