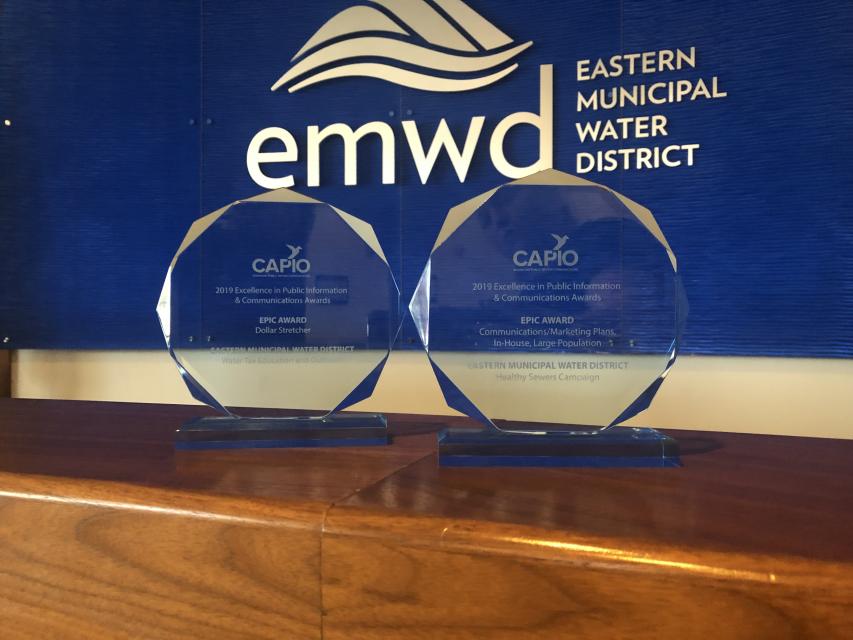 During its annual awards event on April 10, 2019, EMWD was honored with two awards at the level of Excellence in Public Information and Communications (EPIC) – the top prize in each category. EMWD was recognized for its Water Tax Education, as well as, its Healthy Sewer campaign.

EMWD earned the highest marks in the “Dollar Stretcher” category for its Water Tax Education. EMWD was among the statewide leaders in educating customers about the potential Water Tax and in proposing alternative, tax-free solutions to the issue of providing safe and reliable drinking water to areas that have failing systems. The Dollar Stretcher category highlights creative local government communications activities completed with little or no funds.

EMWD also earned the top award in the “Communications/Marketing Plans, In-House, Large Population” category for its Healthy Sewers campaign, which was developed to educate customers about the importance of doing their part to maintain a healthy sewer system.

“Communicating with and educating our customers is a top priority,” said EMWD Board President Ron Sullivan. “The EMWD Board is proud that the District has been recognized for its efforts to engage our communities and partners in understanding the services EMWD provides.”

CAPIO is a statewide professional organization dedicated toward advancing public sector communications through training, education and advocacy work. EMWD has previously been honored by CAPIO, by the Public Relations Society of America, and by J.D. Power and Associates for its industry-leading communications efforts.

Eastern Municipal Water District is the water, wastewater service and recycled water provider to approximately 827,000 people living and working within a 555-square mile service area in western Riverside County. It is California’s sixth-largest retail water agency and its mission is “To deliver value to our customers and the communities we serve by providing safe, reliable, economical and environmentally sustainable water, wastewater and recycled water services.” More information can be found at www.emwd.org.