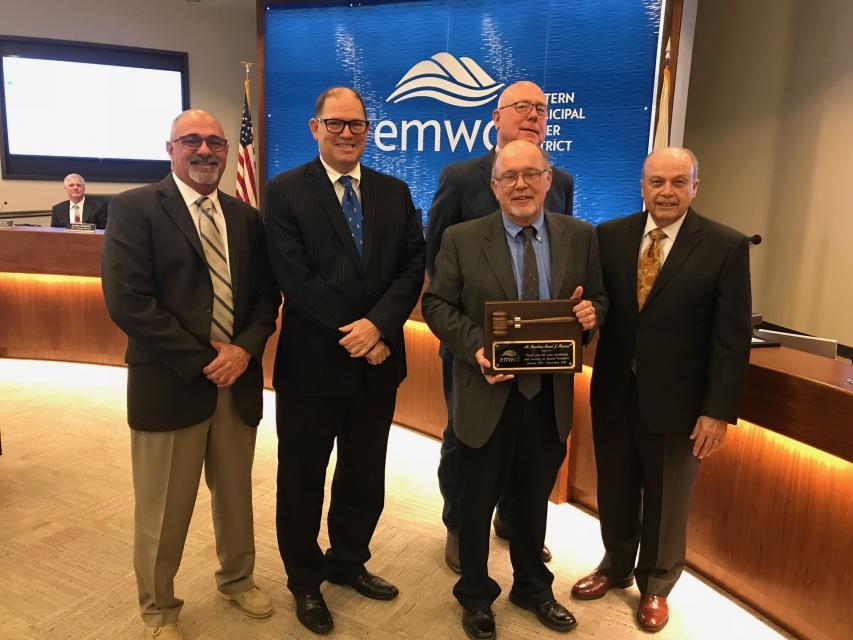 Perris, CA (January 16, 2019) — Ronald Sullivan, who represents the Perris and Menifee area, was selected as the new President of Eastern Municipal Water District’s (EMWD) Board of Directors on Wednesday, January 16, 2019.

Sullivan has served on EMWD’s Board of Directors since January 2003 and most recently served a two-year term as Vice President. David Slawson, who represents the Moreno Valley area, has served as President for the previous two years.

“I am honored that my colleagues on the Board have entrusted me to serve as President,” Sullivan said. “Our Board of Directors remains committed to providing safe and reliable water, wastewater and recycled water service as well as a comprehensive brackish water desalination program at an exceptional value to our customers.”

Sullivan, a Menifee resident, also serves as EMWD’s representative on the Board of the Santa Ana Watershed Project Authority and is active with the National Water Resources Association and in federal affairs issues on behalf of EMWD.

Philip Paule was selected as Vice President. Paule, a Winchester resident, represents the Winchester, French Valley, Lakeview and Nuevo areas and has served on EMWD’s Board of Directors since 2007.

Eastern Municipal Water District is the water, wastewater service and recycled water provider to approximately 825,000 people living and working within a 555-square mile service area in western Riverside County. It is California’s sixth-largest retail water agency and its mission is “To deliver value to our customers and the communities we serve by providing safe, reliable, economical and environmentally sustainable water, wastewater and recycled water services.” More information can be found at www.emwd.org.