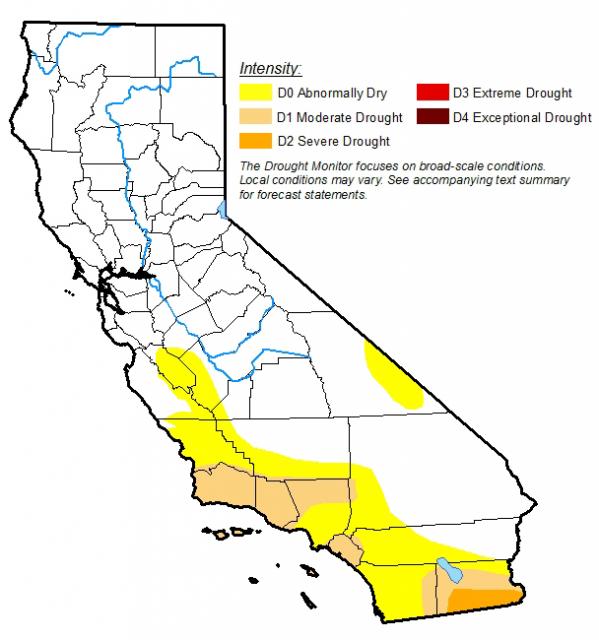 April 7, 2017: Governor Jerry Brown announced an end to the drought state of emergency and the State’s transition to a permanent framework for making water conservation a California way of life.

Spring season is here! When planting your garden this season, please consider reducing turf grass in your landscape and replacing it with water-efficient plant choices. Take a look at our rebates and programs for ideas on how you can make your landscape more water wise.

February 3, 2017: On February 1, 2017, EMWD’s Board of Directors adopted a Resolution to encourage Governor Brown to declare that the statewide drought emergency is over and direct the State Water Resources Control Board at its upcoming February 8, 2017, meeting take appropriate actions to allow the current Emergency Conservation Regulation to expire. Click here for more information regarding EMWD’s resolution.

January 2017: Winter is no time to water…let Mother Nature do the work for you. For every 1/4 inch of rain, you can stop watering outdoors for at least one week. 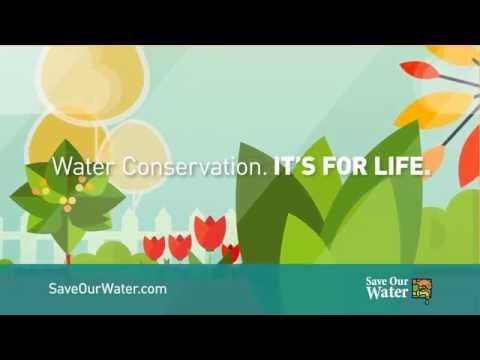 The Fall season officially begins on September 22, 2016, and we’d like to provide a few reminders: 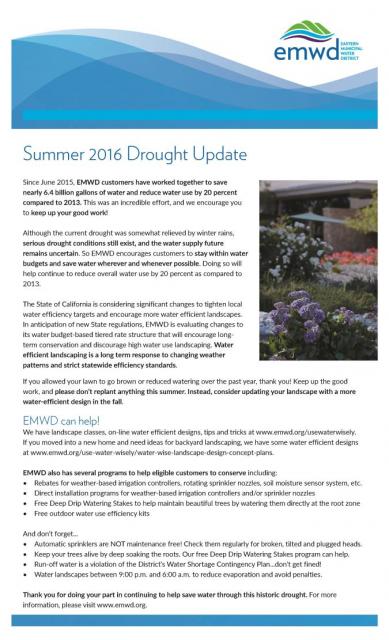 If customers maintain water budgets and eliminate water waste, EMWD expects to reduce overall water use by 20 percent as compared to 2013.

EMWD’s Board of Directors unanimously approved the action, moving EMWD back into Stage 3c, the Mandatory Waste Reduction stage of its Water Shortage Contingency Plan, effective immediately. EMWD had been in Stage 4b, the Mandatory Outdoor Reduction stage since April 2016, which included a 30-percent cut in outdoor water budgets.

Stage 3c fully restores water budgets, but still prohibits runoff and water waste, in alignment with the Governor’s permanent restrictions on water waste and EMWD’s water waste prohibitions. All water used in excess of a customer’s budget will be charged at the highest price point. These on-going requirements for customers to avoid water waste are in recognition that four of the last five years have been exceptionally dry, and this year’s improvement in rainfall and snowpack was primarily concentrated in the northern portion of the state.

May 18, 2016: The State Water Resources Control Board (SWRCB) significantly altered its regulatory framework regarding emergency water conservation measures, as put forth by the Governor through a series of Executive Orders. The new SWRCB regulations are based on a supplier’s actual water supply sources. EMWD has advocated for such an approach, as the approach supports its customers’ investments in a diverse water supply portfolio.

Under the revised regulations, EMWD anticipates it will be able to self-certify its new reduction target. It is anticipated that the relief will be significant.

On June 1, 2016, EMWD’s Board of Directors will review EMWD’s current drought stage and it is anticipated that the Board will take action on behalf of its customers to modify the drought stage.

EMWD would like to remind its customers that our service area and California are still experiencing drought conditions and that conservation is still crucial toward ensuring long-term water supply management. Water waste restrictions will continue to be in effect and customers are encouraged to remain efficient with their water use.

April 7, 2016: The State Water Resources Board (SWRCB) lowered the water savings target for EMWD to 20 percent.

April 6, 2016: EMWD’s Board of Directors approved moving the District into Stage 4b of its Water Shortage Contingency Plan, effective immediately, based on improving statewide water supply conditions and pending adjustments to the conservation mandate imposed on EMWD by the SWRCB. Outdoor water budgets are now reduced by 30 percent compared to non-drought conditions; they had previously been reduced by 70 percent in Stage 4c.

February 3, 2016: On February 2, 2016 the State Water Resources Control Board (SWRCB) extended the Emergency Drought regulations until October 2016. In addition, the SWRCB approved adjustments could be made based on growth, climate and sustainable supplies (potable reuse, desalination, impaired groundwater). EMWD is applying for the maximum adjustments possible.

January 27, 2016: On February 2, 2016, the SWRCB is likely to extend the Emergency Regulations and will consider proposed adjustments to the water savings targets based on the following categories:

If the SWRCB decides to allow for adjustments to water savings targets based on the categories above, EMWD will apply for the maximum credit possible. Please check back after February 2, 2016 for updated information.

January 20, 2016: EMWD’s Board of Directors approved a change to the Administrative Code which prohibits all Commercial, Industrial and Institutional customers from irrigating non-functional (decorative) turf while EMWD is in Stage 4c of its Water Shortage Contingency Plan.

January 6, 2016: El Niño conditions and predictions in early January, combined with cooler temperatures and shorter days in winter, means outdoor watering could actually be unnecessary over the next few months. Plus, if customers stop watering outdoors this winter, EMWD customers can come closer to achieving their water savings target ordered by the SWRCB.

Therefore, EMWD’s Board of Directors voted to move into Stage 4c of the Water Shortage Contingency Plan. Stage 4c became immediately effective, and will be reflected on bills beginning February 1, 2016.

EMWD’s rate structure provides a direct financial incentive for customers to conserve and those who reduce use may see their bills go down. EMWD has also not placed drought surcharges on customers, as some neighboring agencies have.

EMWD will be working with Commercial, Industrial and Institutional customers to make further water use reductions, as we believe there is significant savings to be achieved by these larger landscape customers.

December 8, 2015: In the months of October and November, EMWD once again fell short of the State-mandated conservation target of 28 percent as compared to 2013. We have not been able to achieve the target water savings since mandatory conservation reporting was implemented in June 2015:

October 20, 2015: Through the first three weeks of October and projections for the remainder of the month, EMWD anticipates a roughly 15-percent reduction in water use compared to 2013’s baseline figures. EMWD has been instructed by the State Water Resources Control Board (SWRCB) to reduce use by 28 percent.

EMWD achieved a 24-percent reduction in September, but increased temperatures in October – this year has averaged 10 degrees warmer than October 2013 – have led to a smaller reduction in water use.

Failure to meet the state-mandated reductions could result in fines of $10,000 per day. EMWD has been proactive in communicating with the SWRCB about its efforts to reduce usage in an effort to avoid a Conservation Order.

As a result, EMWD is asking customers to take extra steps to reduce water usage in the coming weeks in an effort to help bring EMWD closer to reaching its state-mandated reduction in water usage.

Customers can reduce water use by limiting outdoor irrigation, taking shorter showers and ensuring that they only do full loads of laundry and dishes. Because outdoor water budgets are significantly reduced in the fall, customers should reduce their irrigation schedules in order to remain within budget.

Customers are also encouraged to report any water waste – including run-off – by clicking here or calling EMWD’s Water Waste Hotline at 951-928-3777, ext. 3306, or by using the EMWD Water Waste Reporting mobile application, which is available for all smart phone devices.

September 16, 2015: EMWD is currently in Stage 4b of its Water Shortage Contingency Plan (WSCP). This reduces outdoor water budgets by 30 percent, which will be reflected on bills dated after September 30, 2015.

September 2, 2015: EMWD’s Board of Directors voted unanimously to move into Stage 4b of the District’s WSCP, which reduces outdoor water budgets by 30 percent. Stage 4b allows for reductions of up to 50 percent in outdoor (Tier 2) water budgets as a response to California’s ongoing drought.

The changes will be effective no sooner than September 16, 2015. EMWD’s Board delegated to staff the determination on the effective date based on the outcome of a pending meeting with SWRCB enforcement staff.

The 30-percent cut in outdoor water budgets is from the baseline figure for each individualized customer account. EMWD has been in Stage 4a – which includes a 10-percent reduction in outdoor budgets and an elimination of Tier 3 pricing – since June 1, 2015. Moving to Stage 4b is an additional 20-percent cut for a total of 30 percent.

August 13, 2015:  While approximately 70 percent of our customers are now consistently using less than 50 percent of their outdoor water budgets, many customers are still falling short of the target. As a result, we received a notice of violation from the SWRCB with direction to take additional steps necessary to further reduce our customers’ water usage.

July 9, 2015:  The County of Riverside adopted Ordinance No. 859.3, an update of the Water Efficient Landscape Requirements. Adoption of this Ordinance will significantly reduce the amount of water usage by new development by imposing strict conservation standards on landscaping.

June 2015: EMWD reduced water use by 15 percent in comparison to June 2013. The SWRCB is using 2013 as the baseline to measure water savings. So we need to continue to save more water wherever and whenever possible!

May 8, 2015: In response to the Governor’s Order, the SWRCB regulations, and the exceptional drought conditions, EMWD’s Board of Directors voted to move into Stage 4 of the Water Shortage Contingency Plan (WSCP), effective immediately.

May 5-6, 2015: The SWRCB adopted the enforcement regulations requiring EMWD to reduce overall water use by 28 percent compared to 2013.

April 7, 2015: The SWRCB issued its draft enforcement regulations based solely on each agency’s reported gallons per day per person estimate from September 2014 and categorized EMWD as needing to reduce water use by 25 percent by February 2016. Failure to meet that target could result in fines of up to $10,000 per day.

EMWD pointed out to the SWRCB that, among other things, their enforcement regulations did not provide credit to agencies who already achieved significant conservation prior to 2013. In addition, the gallons per person, per day figures were not adjusted for climate differences or housing density variations within the state. EMWD also, in partnership with several other water agencies, delivered an alternate enforcement model to the SWRCB that considered climate, housing density, etc. to determine reduction goals.

April 1, 2015: The Governor issued an Executive Order to implement statewide mandatory water reductions for the first time in California’s history, tasking the SWRCB with enforcement of those reductions.

Please check back for more updates soon, or sign up for email notifications.

Please scroll down to view some of the Frequently Asked Questions regarding the drought…just click on a question to reveal the answer.